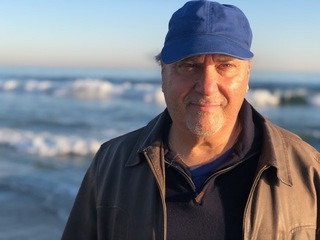 Richard Vetere is a playwright, novelist, poet and film and TV writer, actor, director and producer. His most known work is The Third Miracle published by Simon & Schuster and he cowrote the screenplay adaptation starring Ed Harris directed by Agnieszka Holland, produced by Francis Ford Coppola and released by Sony Picture Classics. He wrote the cult classic movie Vigilante called "one of the best indies of the 1980s" by BAM and his teleplay adaptation of his stage play The Marriage Fool starring Walter Matthau and Carol Burnett was the highest rated TV movie ever for CBS TV Films. He also wrote the teleplay adaptation of his stage play Hale The Hero! for The General Motors Playwrights Theater starring Elisabeth Shue on A&E as well as the screenplay adaptation of his stage play How To Go Out On A Date In Queens starring Jason Alexander.  His other published novels including The Writers Afterlife and Champagne and Cocaine published by Three Rooms Press and Baroque published by Bordighera Press. His published books of poetry include Memories of Human Hands, A Dream of Angels and The Other Colors In A Snow Storm.  His short stories have been nominated for Pushcart Prizes.  He has over twenty plays published by Dramatic Publishing, Smith & Kraus and Applause Books. His plays include Caravaggio, Gangster Apparel, Machiavelli, One Shot, One Kill and Bird Brain with production of the plays Off-Broadway in NYC, Chicago, Melbourne, Cyprus, Rome, Paris and London. He is a Lifetime Member of the WGA East and was elected to Council for a two year term in 2012 and is a member of Poets & Writers. He has receieved numerous grants for writing including a Mary Roberts Rinehart Grant for Playwrighting, a Cultural Council Foundation for poetry and playwrighting and grant from the Russo Brothers Film Forum to write, direct and produce a documentary Where Are We Now?  The Italian American Today.  He was a guest of the Chicago Humanities Theater Festival for his play Caravaggio.  He has a masters in Comparative English Literature from Columbia University and lectured at NYU in the master's program in playwrighting and film writing and does continue to lecture at Queens College. He is a born and raised New Yorker and still lives in New York City.  His most recently published novels are The White Envelope and I, Human both award winning mystery novels published by Absolutely Amazing Press in 2019 and 2020.